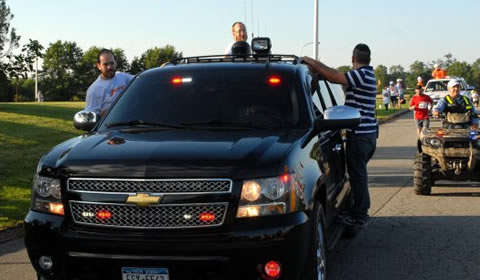 United Search and Rescue (USAR) provided 48 hour support for the runners. We had teams in Jeeps, pickup trucks, ATV’s and motor scooters, providing security and emergency support. Out teams operated in shifts the entire length of the race providing refreshments to the runners on the line.

Nathan Vershelizer was exemplary in his role as scene manager and overall event marshal.

A group of Jewish runners jog a few miles in Brooklyn’s Prospect Park every Wednesday night for their health. On July 28, they were joined by a few dozen more runners on a much longer route. For someone else’s health.

Sixty runners, all men, took part in the first 200K (20 kilometers is 12.4 miles) relay race from Brooklyn to upstate Sullivan County, sponsored by the newly formed JRunners organization. The participants raised more than $100, 000 for the medical expenses of a neighbor of a JRunners founder who has ALS, also known as Lou Gehrig’s Disease.

“God gave you feet to walk and to run – then use them to run for a higher purpose and make a difference in someone’s life,” says Steven Friedman, one of JRunners’ co-founders.

The race’s theme was “We Run For Those Who Can’t.”

The Brooklyn-Borscht Belt relay race, accompanied by an educational campaign about ALS, drew runners from age 12 to 50. A few non-Jewish runners entered, Friedman says. The event was all male for modesty’s sake, since competitors shared space in RVs overnight.

A smaller scale women’s race is being planned.

The relay race, which began in Prospect Park passed through some 40 municipalities in New York and New Jersey, says Friedman, who founded JRunners with old friends Matt Katz and Saul Rosenblum. ”We had cooperation from all the police departments” in both states, he says.

Runners exchanged wristbands – instead of a relay race’s traditional baton – along the way. At the exchange points were live music and catered kosher food, stops for prayer services, cheering spectators and a broadcast of the JM in the AM radio show.

The race “showed people you can do anything you put your mind to,” Friedman says. “A race like this … has the potential to change the health and fitness mindset in the Jewish community.”

Some unexpected fundraising took place during the race, he says. “We had drivers pull up alongside runners and hand them money. People were inspired.”