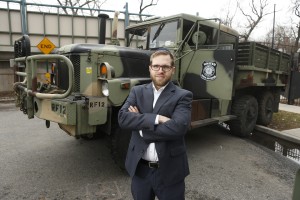 An Orthodox Jewish-founded search-and-rescue group is acquiring heavy-duty military equipment in the wake of Hurricane Sandy to help out in emergencies when standard vehicles just won’t cut it.
One of its most impressive recent acquisitions is a US Army cargo truck that’s turning heads in Flatbush, Brooklyn.
“A truck like this is a big asset,” said Lee Rosenberg, who founded the nonprofit about eight years ago.
Initially, the 30-member organization — which gets by on private donations and trains its members in everything from first aid to operating chainsaws — started off as a group of Orthodox ATV enthusiasts who responded to a missing person in the upstate town of Woodridge.
Hurricane Sandy made members realize that bigger is better in times of crisis.
That’s where the “deuce and a half” comes in, Rosenberg said of the truck with a payload of 2¹/₂ tons.
The AM General-made 1994 M35-A3 six-wheeler reaches a top speed of about 55 mph.
Group member Simon Rimpler paid about $10,000 for the mitzvah mobile, which he purchased from a pal last year.
Rimpler, 27, said he’s gotten plenty of curious reactions when he cruises around the neighborhood.
“People salute me,” he said.
And if he wears a baseball cap instead of a yarmulke, “They think I’m a bit of a redneck, playing around with a truck like this.”
Rimpler, a paramedic by trade and congregant at Flatbush Minyan on Avenue H, has been parking the truck behind the synagogue for about two months.
“It’s a deterrent. If some bad guy thinks the US Army is here, he’ll think twice,” said Rabbi Meir Fund.
FILED UNDER BROOKLYN , HURRICANE SANDY , ORTHODOX JUDAISM